Based on an interview conducted for The Yorker. An energetic interviewee, Patrick Wolf was speaking in his dressing room at The Cockpit in Leeds, on 20 May 2009. 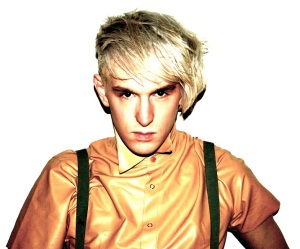 Now, I’ve been to a fair few gigs in my time, but it’s not often that I find myself watching a peroxide-blonde rubbing himself on stage, posing suggestively with a microphone down his pants and climbing the walls in something resembling Borat’s mankini. But that’s just a smattering of the experiences on offer at a Patrick Wolf show.

Love him or loathe him, you’ll agree when I say that this is a man who likes to be at the centre of attention. Having got “a bit of a reputation” for being outspoken in the press after the release of his last album, 2007’s The Magic Position, Wolf promises to be “much more ‘no comment’ this time round” when we speak before he takes to the stage. It’s a grand statement of intent for a man so outspoken, and it’s hardly a surprise when he doesn’t exactly adhere to it.

After being released from his record contract, Wolf’s latest album, The Bachelor, has been released via the revolutionary Bandstocks approach, allowing his fans to fund his recording in exchange for various privileges: “I needed a way to get it finished, and I didn’t really want to get down on my hands and knees and start licking arse in London for money, so I went to my supporters.” Luckily for him, the personal approach paid off, and The Bachelor was released at the start of this month to almost universal acclaim.

Escaping the shackles of the mainstream music industry has turned out to be more a blessing than a curse, partly because the scene in the UK is “miserable” now (whilst he admits to liking underground garage, bashment and donk (they’re real things, I checked), Wolf confesses to being “so bored with all these starlets the record companies are churning out right now”), and partly because the advent of illegal downloading has lost the major labels plenty of sales (“it just so happens right now that people think that can take everything for free, which is fine.”)

Above all, though, Patrick Wolf thrives when apart from the crowd, left to indulge himself without the pressure of mainstream success. “Writing music is an instinctive urge, the urge to create; it’s like doing a big poo; y’know, it just comes out of my bum sometimes, or from my mouth or from my heart. Creativity just happens.”

At the moment, his creativity (wherever it’s coming from) covers all manner of styles, his greatest influences coming from remote places, from literature, art and film (his love of Derek Jarman coupled with a chance encounter near his London flat led to his recent collaboration with Tilda Swinton); unsurprising given that “if the alternative is being influenced by Little Boots, then I’m sure I’d rather go to the National Portrait Gallery for inspiration instead”.

Comments like this are typical with Wolf, his precocious opinions always coming ahead of politeness: “I’ve got to be careful my reputation doesn’t destroy me, but, really, I’d rather be honest than be all ‘X Factor’ about it. So often, I just say what most people in the industry are thinking but don’t say because they feel like they have a gun held to their heads, scared that they might offend their demographic.”

For such an extroverted and individual artist, it could seem that Patrick Wolf’s antics are somehow deliberately alternative, but not so, he claims: “it’s a misunderstanding from the way that I look that I’ve thought about it; if I’d actually considered how I come across to the public, I’d probably start panicking and change my identity and my music. I’ve recently become very strong in the feeling that I don’t need to care about public perceptions, as long as I remain true to my sense of individuality. Whether I’m the clown or the prophet, I don’t care. Either way I’m happy.”

It must be said, whether posing in bondage gear, straddling a microphone stand on stage, or just talking to a student journalist in his dressing room, Patrick Wolf speaks the truth: he does seem happy as ever.