Perfume Genius – Put Your Back N 2 It

Written for The Music Fix. 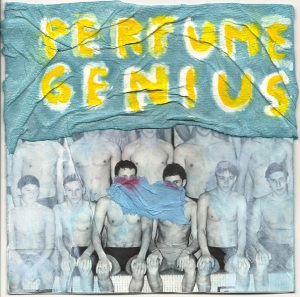 Seattle’s Mike Hadreas made his debut as Perfume Genius in 2010, on a lauded album – Learning – which seemed to function primarily as a channel for his earlier life’s despair. This follow-up mostly continues in the same stratum; the twelve confessional songs are leanly structured around demure guitar and piano parts. Its alphanumeric title might have implied some unexpected shift towards the stylings of Prince, but of the Purple One’s back catalogue, only ‘Nothing Compares 2 U’ combines such quietly earnest composition with a text-speak title.

So many ostensibly troubled singer-songwriters produce music which slides lazily into over-indulgent schmaltz or affected emo, but Put Your Back N 2 It sidesteps both traps. To its credit, Hadreas’ lo-fi recordings are understated and unpretentious, the best of them evoking the refined textures of Peter Broderick’s folksongs. This time around, the personal lyrics still refer to suicide and drug abuse, but there are glimmers of hope amid the misery – the title track is shot through with the optimism of a relationship’s early stages. Even when his outlook tilts upwards, though, the arrangements have a tendency to feel oddly insubstantial. It’s as if Hadreas’ music can’t quite escape the mental exhaustion which has overwhelmed him in private. It’s a shame, because the result is an album slighter and less distinctive than his story might warrant.

This entry was posted in Albums and tagged Perfume Genius, Peter Broderick, Prince. Bookmark the permalink.